At first it seems like the typical “there’s no golden rule to getting old” article, right? 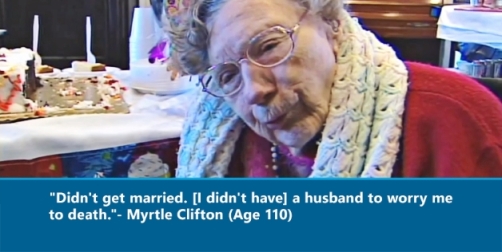 Some of the supercentenarian advice is sweet, some is a bit strange and a couple are everything we’ve always hoped for. Who knew bacon and whiskey were the fountain of youth?

more photos via How to live to 100: advice for life and living longer.

Some appear silly, and some fly in the face of recent studies (for example, married people tend to be healthier, and ergo live longer).

But if you try to generalize the advice, much of it boils down to one thing: have fun, be playful, don’t stress out too much about the details.

If you want to live to be 100, you have to give yourself space to play!

I was really inspired by that blog post I shared a couple of months ago about cancer survivors and what they’d learned about life. I also posted a survey done with older folks last year giving advice on what NOT to do.

Well, thankfully all of that hard-earned knowledge is coming out in book form. Many of the interviews can also be at legacyproject.human.cornell.edu. From the NYTimes:

Eventually, most of us learn valuable lessons about how to conduct a successful and satisfying life. But for far too many people, the learning comes too late to help them avoid painful mistakes and decades of wasted time and effort…

Enter an invaluable source of help, if anyone is willing to listen while there is still time to take corrective action. It is a new book called “30 Lessons for Living” (Hudson Street Press) that offers practical advice from more than 1,000 older Americans from different economic, educational and occupational strata who were interviewed as part of the ongoing Cornell Legacy Project.

Its author, Karl Pillemer, a professor of human development at the College of Human Ecology at Cornell and a gerontologist at the Weill Cornell Medical College, calls his subjects “the experts,” and their advice is based on what they did right and wrong in their long lives.

You can also read a summary of their advice in the article: Advice From Life’s Graying Edge on Finishing With No Regrets

What are your life lessons?

More and more research is finding that the ability to cope with stress and bounce back better correlates with long life. Just a reminder to take it easy…

Gerontologist and commentator Mark Lachs says one of the keys to a long, healthy old age is the ability to keep moving forward after life’s inevitable setbacks.

listen via Want To Live To 100? Try To Bounce Back From Stress : NPR.

One study found that 50 year olds with a negative outlook on life lived seven years shorter than those with a positive outlook.

What’s interesting is that more than avoiding stress it seems more important to have the ability to bounce back from it. So healthy coping mechanisms for handling stress, as well as a good attitude about life, seems to be more important than nutrition and exercise.

This New York Times article about budget cuts in New York State affecting senior community centers struck a nerve with me. In a good way. I am a strong advocate for promoting quality of life even into old age, especially into old age, and I think we youngsters forget just how important these community spaces can be for old folks.

In these places seniors can get a cheap meal, planned activities like games or fitness classes (we’re talking more Tai Chi than Tai Bo) but also companionship, and opportunities to do new things and learn. They also get experiences they never would have gotten to do otherwise; they realize they love to dance, or simply fall in love again.

However, with states and cities as cash strapped as they are, these places are in jeopardy of closing.

Last year, [New York] state and city budget cuts threatened 75 of the centers… and 29 were ultimately closed. The centers are intended to serve New Yorkers over age 60. This January, the dance began again: Gov. Andrew M. Cuomo proposed redirecting $25 million from the centers to child welfare; that, said the city’s Department for the Aging, would mean closing about a third of its centers; on March 15, the centers got a reprieve, with the Assembly and the State Senate voting to restore the money.

In a country where we are already isolating generations away from each other, it seems all the more important to at least offer a place for this demographic of people to meet and have some kind of community.

My grandparents belonged to a retirement home that practically forced them to go out and socialize with each other, be involved in community efforts, and participate in outreach to youth. I was thrilled to see new activities and challenges thrust upon my grandparents; learning new skills and taking on new responsibilities at 80 plus was revitalizing for them. However, that retirement home also ate up a lot of money, money that most folks don’t have, and soon-to-be-old folks are in worse shape as far as savings go due to the economy.

Some people may argue that it’s not worth investing in a demographic that isn’t giving back to our society. Besides the argument that they already GAVE to our society for 50 or more years, I’d argue that many of them could give back if we gave them the opportunity. There are lots of volunteer and time-bank programs where retired folks can donate their skills, from fixing leaky faucets to knitting to mentoring.

One of the programs my grandfather was in was a mentor for “troubled kids” as he’d call them who were bussed into the retirement home every other week or so to sit for an hour to talk to an old person. It was community service that a lot of them probably didn’t like the idea of at first, and to their friends they probably didn’t get all that excited about it. But when you actually saw the kids interact with the older folks, these kids opened up and really enjoyed their time with him. This was the first time in a long time that a lot of these kids got to say what was on their minds, and were really listened to. My grandfather also just happened to be a guidance counselor for many, many years, so for him this was also a treat to brush up on his old guidance counseling skills and feel like he was helping kids along the path “to the straight and narrow.” But even without that training, the older mentors felt like they were contributing to society, and so did the kids, as well as both getting something in return.

So before we look to cutting budgets on senior community centers, I argue we should look at these as possible hubs for other community activities, or community focal points. Just like lots of groups rent out the church basement for meetings or choir rehearsals, city planners should be looking at these spaces as community centers, not just senior centers. These centers offer a chance for a human being, of any age, to feel like a party of a community again, to feel human.

My grandma and I had a pact that we’d both do our best to live to be 100. She died at 85 after a long, happy life, married to her best friend since 1st grade. Go Mommo! But I’m still in the running, so I’m always interested in how Centenarians live it up. And it seems to boil down to two things: luck, and keeping a good attitude about life.

Israeli physician Nir Barzilai and his staff at the Institute for Aging Research at the Albert Einstein College of Medicine in New York have asked hundreds of centenarians hundreds of questions, including details of their living circumstances, nutrition, alcohol consumption, smoking, physical activity, sleep, education, status, and spirituality — all in the hope of finding commonalities.

The results are sobering: “There is no pattern,” says Barzilai, 54. “The usual recommendations for a healthy life — not smoking, not drinking, plenty of exercise, a well-balanced diet, keeping your weight down — they apply to us average people, but not to them. Centenarians are in a class of their own.” He pulls spreadsheets out of a drawer, adjusts his glasses, and reads aloud: “At the age of 70, a total of 37 percent of our subjects were, according to their own statements, overweight; 37 percent were smokers, on average for 31 years; 44 percent said that they exercised only moderately; 20 percent never exercised.”

More at The last word: The secret to living past 100 – The Week.

The women in my family tend to live a long time, although I don’t think anyone has made it to 100 yet. What is your family’s pattern for longevity? Were people healthy right before they died, or did they linger with illness?

An oldie but goodie:

A large Gallup poll has found that by almost any measure, people get happier as they get older, and researchers are not sure why…

via Happiness May Come With Age, Study Says – NYTimes.com.