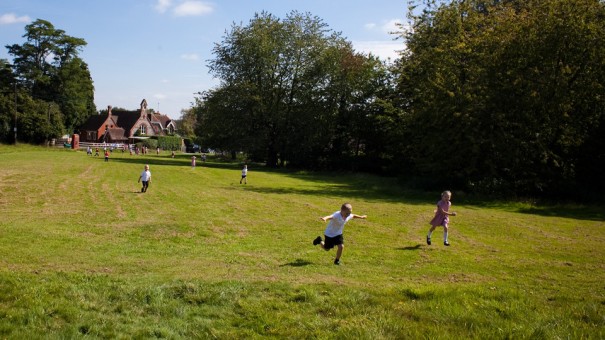 A recent article in the online magazine Co.EXIST discussed a study that found children benefit from being in natural environments, even if the environment is designed to appear natural but is actually human-made:

Dawn Coe, an assistant professor in the Department of kinesiology, recreation, and sport studies at the University of Tennessee spent time observing the behavior and time children spent playing on a local playground. After playground renovations added a gazebo, slides, trees, a creek, and a natural landscape of rocks, flowers and logs, Coe returned a year later to observe differences. Working with a statistician, Coe found children spent twice as much time playing in the natural landscape, and were less sedentary after the renovation and more active.“Natural playscapes appear to be a viable alternative to traditional playgrounds for school and community settings,” said Coe in a university statement. “Future studies should look at these changes long-term as well as the nature of the children’s play.”

via The Best Playground Is The One Nature Provided | Co.Exist: World changing ideas and innovation.

I attended a conference a couple of years ago where playground designers were reporting discovering the exact same thing – if you give a kid a pile of dirt and tree bark to play with and a bucket of water, they will have WAY more fun, play more, and learn some things as well.

This shouldn’t come as a surprise based on previous research on us humans:

For decades, scientists have reported our species exhibits a consistent, if not quite understood, response to spending time around nature: it boosts our mental and physical well being.

The scattering of findings have held in hospital beds, public housing, and Japanese forests. A 2001 study of public housing found the mere presence of trees and grass reduced reduced reported aggression and violence. Another showed people shown a stressful movie recovered to a normal state–as measured by metrics such as heart rate, muscle tension, and blood pressure–“faster and more complete[ly]” when exposed to natural rather than urban environments.

However, a lot of cities and schools are reluctant to install these kinds of playgrounds since they are considered “untested” or approved by several school or city boards. Thankfully, according to the article, cities are beginning to adopt and install these types of playgrounds:

“Natural playscapes are part of a growing trend appearing in cities across the US including Boston, Phoenix, Chicago, New York, Auburn and others.”

I hope to see more of these pop up around major cities. Do you have a natural playscape near your home? Tell us about it in the comments below.