Making space for listening and being heard…

The normal procedure for submitting a complaint to the government is to write a letter, send an email, or make a long drawn-out phone call. In Seoul, South Korea, there’s an alternative – yelling into a giant sculpture shaped like an ear.

Designed by artist Yang Soo-in, and backed by the organization, Lifethings, the sculpture sits outside City Hall in Seoul. It symbolizes the fact that Mayor Park Won-soon and his administration are willing to listen to the people.Since it’s installation, Koreans have lined up to speak their woes or ideas for civic improvement into the impressively sized artificial ear. 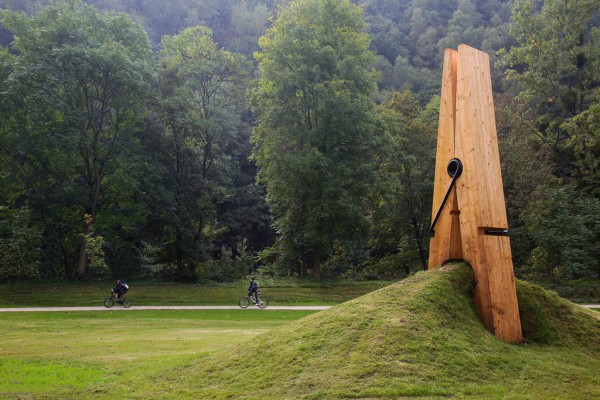 For Turkish artist Mehmet Ali Uysal’s space is paramount, hence the title of this body of work, ‘Space Matters’. Always concerned with how to reshape the space around him, in his art he has achieved this exploration seamlessly. A giant clothespin pinching the landscape, Uysal takes the place of the work as the cause for creating the work. In the end, the gallery space becomes part of the art work, its’ material, form and content. The context becomes the content.Built for the Festival of the Five Seasons in Chaudfontaine Park, on the outskirts of Liege, Belgium generated a bit of attention across the web. It was made for the Festival of the Five Seasons.

I’m on a role with these public art installations, although this one is technically a little older, but I’m still happy to share. I also like that it’s somewhat guerrilla artwork, and done in places that might not otherwise get noticed:

Paige Smith prefers to express her point of view through 3D paper sculptures instead of traditional paint. Her finished works represent mineral formations like crystals, quartz, and especially geodes. But instead of finding these gems in nature, she creates them in some of the oldest neighborhoods in L.A.

“Design is a means to an end,” Smith says. “An effective design creates a bridge between an idea and a recipient. The key term is effective. The creative challenge lies in finding a design solution that doesn’t just hang there but is an active conduit for communication.”

Nowadays people’s attention spans are short, and therein lies the point of her art. Like geodes and other mineral formations that may be found on a hike in the mountains, her paper sculptures are meant to be unexpected treasures. Smith says she understands that many people will not notice her art when they walk along the crowded streets of Echo Park, the Arts District or Abbot Kinney Boulevard. In fact, several of these paper geodes have already been dismantled or thrown away, and one fell victim to the rain. Their fate is not that different from the objects we see in nature as we walk along a hiking trail – but the memory and photographs live on. Smith maintains an online map for those who wish to hunt for the existing ones.

Know of any good yarn-bombings or other public art meant to improve or enhance public space? Share your findings with me via email or in the comments below.

I love public sculpture, and I love it even more when people actually use the sculpture.