I think it is a great activist approach to promoting healthy behaviors in a playful way. I’m also thrilled to see that there is a huge demand for this playful kind of sign creation and development, and Tomasulo has been able to turn it into a business. 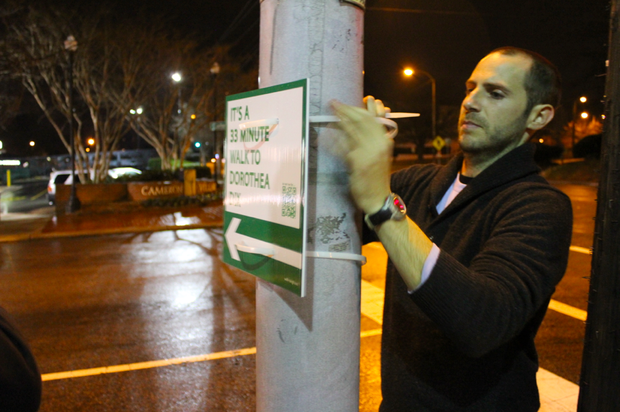 The signs, the brainchild of then-graduate student Matt Tomasulo, were meant to help people think differently about distances in the city, and to encourage them to get out of their cars and explore the place under their own power.When it debuted in 2012, the project drew international notice and received lots of favorable press coverage, including here on CityLab. It also got the attention of Raleigh’s city government, which eventually took the signs down for violating local ordinances. But the city’s planning director was a fan of the concept behind Tomasulo’s action, and soon they reached a compromise. The signs went back up, with the blessing of the city, as a pilot education project.

More at the source: The Knight Foundation Is Funding a Large-Scale Expansion of Raleigh’s ‘Guerrilla’ Wayfinding Signs – CityLab

I think this kind of placemaking and wayfinding is great, as it promotes the landmarks in a city and promotes walking. I think it would be a great opportunity for actual cities to order these, even for temporary things like festivals or during a longer tourist season.

One thought on “Walk [Your City] started as guerilla public art statement, now a small business.”