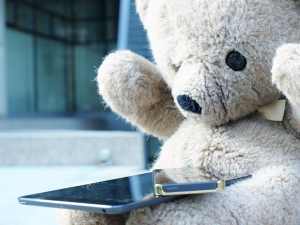 One way to do that is to make the devices less scary, a la a Medi-Teddy. 🙂

The product is called Teddy the Guardian, a plushie installed with sensors that measure heart rate, blood pressure, oxygen levels, and temperature, and then relay that data via Bluetooth to a parent’s phone. The sensors are scattered around the bear’s body; pressing a finger to the bear’s paw, for instance, takes heart rate and oxygen levels.

The idea behind disguising medical tech as a lovable toy is to provide parents and pediatricians more accurate, consistent data points. When a child is stressed out about going to the doctor, his or her vital signs will be skewed. Taking data points when the child is in a neutral emotional state can give doctors a wealth of good information to compare against when something is wrong.

Of course, the bear is just as much a tool for keeping parents attuned to their child’s general well-being as it is a medical device. IDerma co-founder Josipa Majić said that for busy parents who don’t have as much time to connect with their kids, the data can show when their child’s day has been particularly stressful or problematic.

via By Wrapping Sensors In A Plushie, “Teddy The Guardian” Aims To Sell Medical Tech For Kids | TechCrunch.

This is such a great idea to keep kids calm and cooperative during boring and possibly uncomfortable medical procedures. Heck, I know a lot of adults that would probably like to use this.

I’ve previously written about making MRI machines less scary for kids by making them space or aquatic themed, and how a natural view out of a hospital window is correlated with speedier recoveries, but what other things have you seen hospitals do to make it more patient-friendly? Let me know in the comments below.