Well, I was having a good day…but enough about me, what’s going on in with the rest of the world? Pretty miserable stuff, actually: Libyan rebels, Japan’s earthquake, tsunami, and nuclear meltdown, the government shut down barely avoided…well, how are individual states doing? Now we know! A map on alexdavies.net used Twitter to determine just how happy each of our fifty nifty states are. Illinois seems darned happy. Washingtonians are – apparently only kinda sorta happy. From the Seattle PI:

On a scale of one to 42 — where one is ecstatically mirthful — Washington state has a happiness index of 21. In other words, it could go either way.

A map from alexdavies.net uses Twitter keywords to pinpoint just how positive or negative states are.

Oddly enough, sad words for Washington include “Phillies” and “presale,” according to the site. “Starcraft” and “gentleman” also show up as negative words. 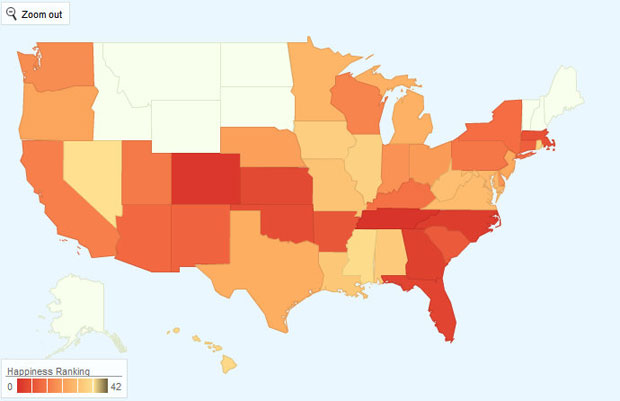