The blogger of Illustrated with Crappy Pictures posted a couple of years ago about the differences between her childhood and her kids’ childhood, and how we are much more focused on safety, for better or for worse.

There are things I did that my kids will never do.

This type of comparison would be way more interesting coming from my grandparents who walked 50 miles barefoot uphill both ways in the snow and all that.

My aunt (who is only six years older than me) used to pull me in my Radio Flyer® wagon by tying a rope to her bike. On country roads. Down hills. No helmets.

But the wagon would go too fast. 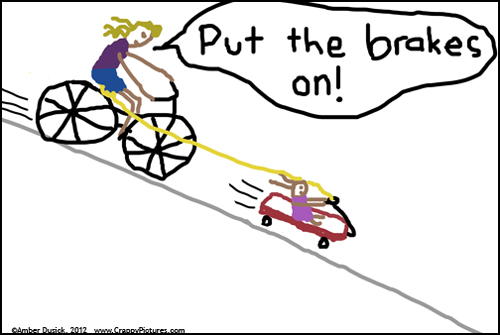 And she’d yell “put the brakes on!” which actually meant “PANIC!” because there weren’t any brakes. We stopped ourselves by turning into the ditch and wiping out. It was fun.

My kids? They wear helmets at the dinner table. You know, just in case they fall off their chairs.

via I did these things as a kid (but my kids won’t) – Illustrated with Crappy Pictures™.

There are definitely some good things to avoid with her own kids, but even the author questions whether she is being too safe.

Are parents as a whole more protective these days? And where is the line drawn between good protection (seat belts and not letting your kids drink bleach) and being over-protective to where it is stifling for them. I think about this sometimes. FreeRangeKids is an excellent read if you are interested in this sort of discussion. 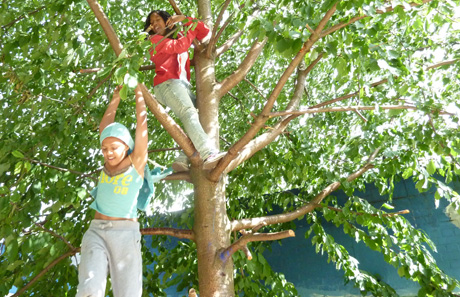 This makes me sad to see that fear is stopping a lot of kids from playing outdoors in the U.K. From the national organization Play England:

The findings of the survey have been released today as an estimated half-a-million children and families nationwide celebrate Playday- the national day for play in the UK, held this year on Wednesday 1st August. Around 500 community events are taking place across the UK to celebrate 25 years of the campaign, which raises awareness about children’s right to play and the importance of play for children’s health, wellbeing and happiness.

The Playday 2012 theme isGet out and play! The campaign, which is co-ordinated by Play England (part of the National Children’s Bureau), Play Wales, Play Scotland and PlayBoard Northern Ireland has gone from strength-to-strength since its conception in London in 1987, when the first events were held to raise awareness about the effects of cuts to local play services.

Cath Prisk, Director of Play England, said: “Simply playing outside should be a normal, everyday event for all children. If we want to foster the next generation of Olympians and sports stars, then we need children with confidence, who love being active and are confident in tackling challenges. If parents are too afraid to let their children play out – because of fear of strangers, traffic or their children having accidents – then we as a society need to address this fear. Whether that’s a community living in a cul-de-sac agreeing children will be playing out every day, a street applying to the council to close the road for play regularly, or residents volunteering to help local play projects reach more children, we can all do our bit to make sure every day is a Playday.”

Mike Greenaway, Director of Play Wales, said: ‘… As a society we have developed an irrational fear that our children are unsafe outside. Compound this with the domination of cars and their drivers, and the world outside the front door doesn’t look particularly attractive for anyone who wants to play there … and children regularly tell us that outside is where they want to play. Children value time, quality places and freedom to play in their own way; we need to support them, recognise that for their wellbeing, they need to play outside and that it’s safer than we think.’

I am glad, however, that the U.K. seems to be taking play more seriously than the U.S.; just the fact that they have a Play Day (August 1), is pretty cool. And the Quote from Mike Greenaway is as accurate for the U.S. as it is for the U.K.: serious crime has actually been decreasing since the early 1990s.

Thankfully where I grew up was pretty rural, so as long as we were within whistle-shot (my mom would blow a whistle rather than yell), we could roam as far and wide as we wanted. What rules did your parents have about playing outside? What rules do you have for kids you are in charge of (kids, nieces and nephews, neighbor kids, grandkids, etc.)? Leave a note in the comment below.

Flashing lights or a “Slow Children” sign are common sights around schools, but now a local school has put in a “a huge, round, sea-themed mural right smack in the middle of South Graham Street in South Seattle,” to alert drivers to pint-sized pedestrians:

Some of the kids who had helped earlier talked about what the painting was supposed to accomplish.”It’s there so people will notice it and think they should really, really slow down so they don’t get into accidents,” said Maya Garcia, 8, one of the students the mural is meant to protect at nearby Graham Elementary School.Her friend Lilly King, 9, had another concern. “I hope they don’t crash into each other when they’re slowing down.”

The mural, part of the Safe Kids Seattle project installed this weekend in the 5100 block, is thought to be the fourth in the city and the first south of Interstate 90, according to Graham Elementary Principal Christina Morningstar. Each year, according to officials, more than 244 children under the age of 14 are killed in pedestrian accidents in the nation. All the Safe Kids projects are designed to alert drivers to the presence of children in school zones.

In addition to the mural, which features a whale and several fish, organizers installed speed bumps and school-warning signs using $35,000 in grant money from FedEx and the Seattle Department of Transportation.

I read this story in the office lounge while I was waiting for my leftovers to warm up in the microwave, and immediately thought this was a good idea not just for schools, but for any place that pedestrians frequent. Often cities will put in colored bricks or tiles at busy crosswalks, but for areas with less options and/or funds to renovate, this is a great solution!