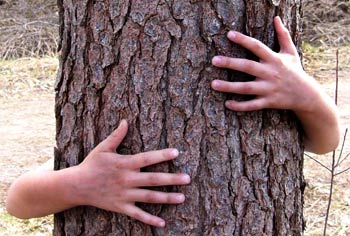 The term “tree hugger” has been applied to people viewed as uber-liberal or too idealistic, however… “it has been recently scientifically validated that hugging trees is actually good for you.”

Research has shown that you don’t even have to touch a tree to get better, you just need to be within its vicinity has a beneficial effect.

In a recently published book, Blinded by Science, the author Matthew Silverstone, proves scientifically that trees do in fact improve many health issues such as Attention Deficit Hyperactivity Disorder (ADHD), concentration levels, reaction times, depression and other forms of mental illness. He even points to research indicating a tree’s ability to alleviate headaches in humans seeking relief by communing with trees.

The author points to a number of studies that have shown that children show significant psychological and physiological improvement in terms of their health and well being when they interact with plants and trees. Specifically, the research indicates that children function better cognitively and emotionally in green environments and have more creative play in green areas. Also, he quotes a major public health report that investigated the association between green spaces and mental health concluded that “access to nature can significantly contribute to our mental capital and wellbeing”.

I”m sorry the article only looked at research in children, as more and more findings are showing the same improvements in adults from interacting and playing with nature, and even results that some would term “nature deprivation” or as Richard Louv calls it “Nature Deficit Disorder.”

One of my favorite little trivia facts is that there are microbes in soil that induce positive emotions in people, so digging in the dirt actually makes you happier. Plus helps you learn and concentrate more.

Hospital patients with a view of a tree or greenery from their room window were found to heal faster.

Those kinds of benefits are for everybody!

While I do feel like it’s important to make sure children get enough outdoor time, I continually want to drive home the message that not only should you encourage children to go outside and play, but adults too. We ALL need fresh air and nature and flowers and bugs and dirt.